Darn! These ducks can be difficult to determine!

Having gone to the Boeung Prek Lapouv wetland in Takeo province for a combined Black-faced Spoonbill and Asian Waterfowl Census, our group encountered several groups of Spot-billed Ducks. Close views, clear enough photographs (below) and dutiful consultation of the field guide led us to consider that these must be Chinese Spot-billed Ducks, as they lacked a red loral spot and had dark blue secondaries. However, it appears it is the moustachial stripe that distinguishes Chinese from Indian Spot-billed Ducks! Thanks James, for pointing this out. So, hopefully a lesson learnt for not only us, but others as well. The pictures below are Indian Spot-billed Ducks of the race haringtoni. See the closest match on Oriental Bird Images by using the following link http://orientalbirdimages.org/search.php?Bird_ID=183&Bird_Image_ID=5658&Bird_Family_ID=&p=65 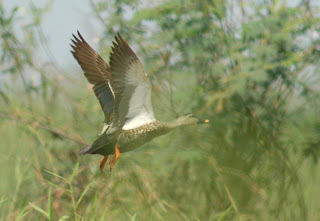 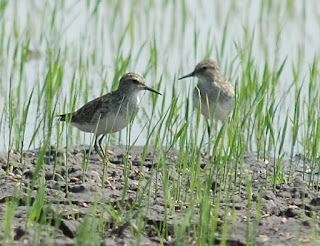 Posted by Cambodia Birding News at 10:15 AM