A somewhat belated report.  This observation occurred during a survey of the Mekong Ramsar Site north of Stung Treng for WWF

At 7AM on March 28th I was walking away from camp to begin my morning walk/survey.  Flying rapidly towards me from the west, I heard an unfamiliar bird calling (a nasally honking whistle) about 20-30m above me.  I quickly readied my camera and managed to get one half decent shot before it had passed over.  It then flew across the narrow channel and into the flooded forest beyond.  It was goose-sized and I knew immediately that it was a white-winged duck, though I had never encountered this bird before.  I traveled across the channel and after searching for half an hour or so I observed it again, flying a few hundred yards to the east.  I then looped way around hoping to by-pass the bird and approach it from the opposite direction.  After walking 300-400m I headed back towards the pools and flushed a pair of Indian spot-billed ducks.  A few seconds later I saw what I knew was the duck, hidden amongst the shrubs.  I tried to get a photo but as I tried to get around the vegetation it flushed, disappearing far to the east.  For the next three hours I wandered around trying to re-locate the duck but to no avail. 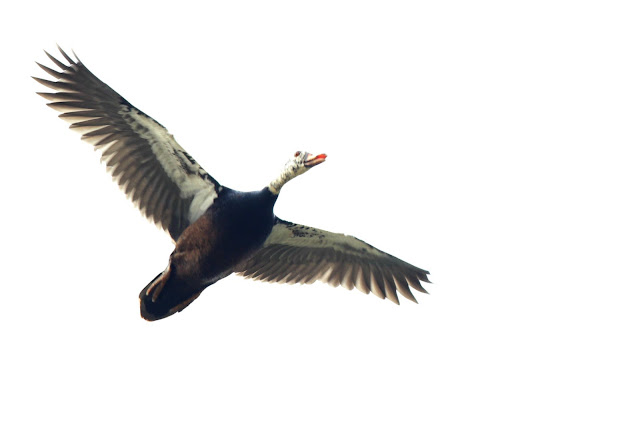