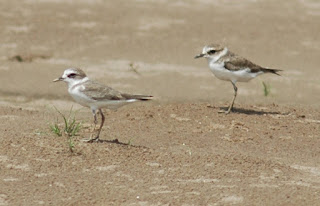 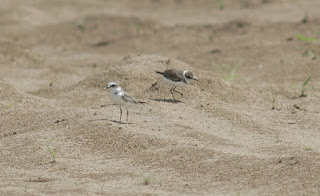 On 10 November 2012, John K and I found two plovers that were larger and more robust than the usual Little Ringed Plovers in an area where the wetland had been filled in with sand on it's way to being Phnom Penh's newest golf course. This is the area just across the Tonle Sap river about 20-30 km along NR5. We first saw the plover that looks most like a Kentish, but then the second one appeared (LHS in photos), which was much paler with white lores, forehead and supercilium, narrow breast band and paler upperparts. We checked with one of the co-authors of the 2008 Forktail paper describing the White-faced Plover and he agrees that it looks like it is one! By the time we were done, the two plovers had flown off together. They weren't present in a later visit the next weekend, although the 50 or so Small Pratincoles were still around on 18 Nov. 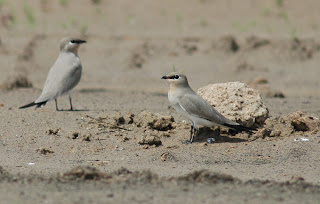